One of the key drivers of this article is that although there are many articles on unit testing in general on internet there are hardly any on unit testing with SAP DataServices. Unit testing has been accepted as a key part of the software development lifecycle for projects building applications in languages such as Java or C++ however I have rarely come across a SAP DataServices project where unit testing is treated as a fundamental part of the software development life cycle. As a result projects without rigorous unit testing spend longer than planned in system testing, identifying trivial defects, and as a result suffer from delays and cost overruns.

This article first explains what is unit testing and what benefits it brings to a project and then looks at how to implementing automated unit testing in a SAP DataServices project.

What Is Unit Testing

A unit test of a Java class would involve executing individual tests against each method and object defined by the class to ensure that they meet their intended functionality. As well as positive testing – testing that the code meets the requirements – unit testing also involves a degree of negative testing that tests that the code handles unexpected situations.

Unit testing then provides the confidence that each component of the system delivers its required functionality. In addition defects are spotted and resolved earlier in the development life cycle and unit testing also provides a degree of regression testing.

Automation of unit testing is an essential requirement for agile development of a data warehouse [2] and additional code or test frameworks are written to facilitate automated unit testing. Not only does automation execute the unit test much quicker than manual testing it also ensures that the unit tests are consistent between executions.

In data integration a unit of code would be any individual process that performs a single movement of data from a source of data to a target. For example a unit would be a process that reads data from one a source followed by applying a series of data transformations and then finally writing the data to a target table or other output. Another example of a unit of code would be scripts that are written to support the data integration process. For example, a script that moves files on the file system or a script unzips a compressed file or a script that logs processing warnings and errors.

For a more complete example consider a data integration system that loads data from flat files into a data mart. The process initially reads data from flat files and loads this data to tables in the staging area, then from the staging area the data is moved to tables in the historical data store (HDS) and then finally from the HDS to target tables in a data mart. Unit tests can then be defined for each separate movement of data from a source to a target as it flows through the system.

The diagram below illustrates this system where each dotted lined box is an individual unit of data integration code that is candidate for unit testing. Each box defines a source, or sometimes more than one source, and a target and these are either flat files (F) or tables (T). Note, even though the target of one process can be the source of another each of these processes are unit tested separately. 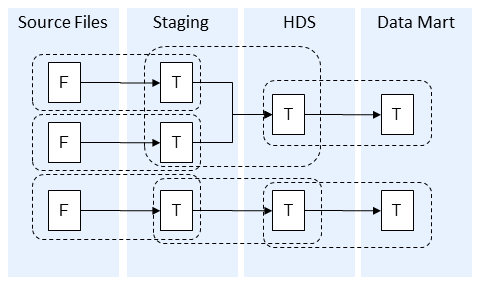 Therefore in a data integration system a component or unit of code is,

In contrast to unit testing system testing would test the system as a whole and as such treats the system as a “black box”. This means that system testing is not concerned with the internal workings of the overall process but it checks that for a given set of inputs the system generates the required set of outputs. In the example process described above the inputs are the source flat files and the outputs are the tables in the data mart layer. System testing also differs from unit testing in that it tests that the components of the system integrate and acts as a complete system rather than testing the functionality of individual components.

There are many benefits to unit testing [3],[4] of which the key benefits are,

It should also be noted that there are limitations to unit testing, primarily that it won’t guarantee a defect free system. Unit testing does not test the integration of the units under test and many defects can occur in this area. System testing is used to identify these defects. Furthermore the unit test is only as good as the written unit test code. Often a trivial step is skipped in unit testing as developer thinks “that bit of code is so simple it can never be wrong” or “just looking at the code I know it works”. As code evolves what may have been simple may no longer be and so should then be tested. Lastly a related scenario is with negative testing being skipped or not being detailed enough. Here the developer has only unit tested for a positive result and has not tested for what would happen when invalid data is received by the integration process.

Now that we have discussed unit testing and its benefits Part II of this article looks at how unit testing can be implemented in a SAP Data Services project.

View all posts by agulland